Summertime!! Oh man. It’s so busy I forget to write. Because I’m drinking so hard.

Remember last time when I wrote about Amsterdam? Yeah, I went to Copenhagen too. CRAZY.

I went to Denmark with my coworker (a fantastic dude named Karl) after our “business trip” in Amsterdam. Because, hey, why not? And seriously, that was kind of how it all happened.

“Sooo, after Amsterdam we should go somewhere.”

“Flights to Copenhagen are cheap.”

And so the epic Denmark trip was born.

The epic Denmark trip was also completely unplanned, because we were sort of lazy and also too busy with other work things to really figure anything out. We tried (and failed) to find friends-of-friends to crash with in Copenhagen, and so we landed at Kastrup Airport at 9pm on a Monday with absolutely no plan and nowhere to stay. SWEET.

Fortunately, using the janky WiFi in the airport and some much needed GPS tracking, we made our way to a hostel (without calling ahead) and luckily they had bed spots. Also, BEER. And so we spent our first night in Copenhagen sitting in the lobby of Sleep-in-Heaven hostel drinking Carlsberg and trying to figure out what the fuck there is to do in Copenhagen.

We began Tuesday morning by walking the 2 miles into the center of the city from our hostel. After exploring the cobbled pedestrian streets for a while, we stopped for breakfast and milkshakes:

Yes, that is a mason jar milkshake. You should be jealous.

After milkshakes and pastries we headed to the Church of Our Saviour, which features a beautiful marble-clad interior and probably the most impressive wood-carved organ I have ever seen. I’m not even going to post a photo because it won’t do it justice. You’ll just have to go see it for yourself.

This lovely church also features an outdoor spiral staircase that goes around the steeple. Like so:

So we climbed it. And then we saw this:

Just the entire city of Copenhagen. No big deal.

After accomplishing that feat (it was a lot of stairs…) we decided we had earned our first beer of the day. It was past noon, so that’s allowed. We wandered back to the Christianshavn Cafe, a little cafe-bar on a boat in the canal and drank some Carlsberg. It was rather unfortunate that we had other plans for the day, because apparently the beers only get cheaper and cheaper as you order more. We probably could have sat there all day… 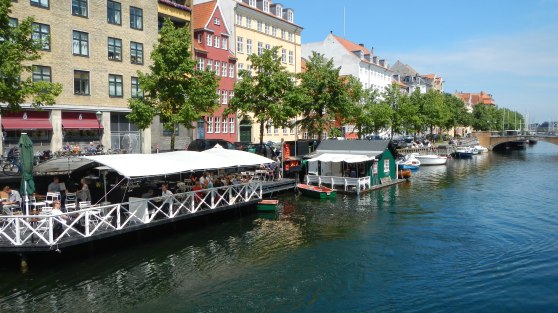 Instead, we began the looooong trek to basically the other corner of the city to visit the Carlsberg Brewery. Because OBVIOUSLY we were going to do that. Who do you think we are?

Along the way, we walked by a fenced-in sandcastle exhibit (but at least we saw one of them, which was pretty sweet), passed by Tivoli Gardens and heard lots of people screaming on roller coasters, saw some sweet graffiti and concert posters, and stopped for lunch.

Oh man. I have loved sandwiches for most of my life (shout out to my old roommate Kate for being the most sandwich-savvy lady I know), but this was a new experience that I never thought I would have.

Smørrebrød. It means “open-faced sandwich” (or even if it doesn’t mean that, that’s what it is) and it is AMAZING. This one had potatoes, crispy fried onions, radishes, cucumbers, tomatoes, and some amazing mayo-type sauce on it. POTATOES. ON A SANDWICH. DEAR GOD. 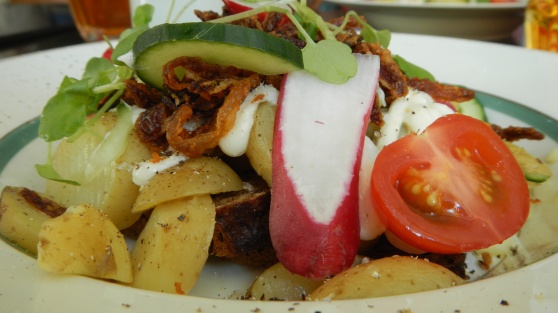 It was truly delicious. Like, whoa. (In Denmark they eat sandwiches, among other things, with a fork and knife. It was a pretty weird experience, but it tasted great so it’s all ok.)

After a wonderfully satisfying meal, it was time to drink! Hurrah!

We headed to the brewery, which wasn’t all that far from the restaurant but it was HOT and we wanted BEER. So it was a welcome relief when we saw this:

After navigating the maze (because the Carlsberg Brewery is about the size of Microsoft campus…I’m not kidding) we finally found the entrance to the brewery itself (or at least, the place where you pay to get in and wander around aimlessly and drink).

We skipped straight past Section 1 (the gift shop) and headed to Section 2 (Bar 1847), where they have the ORIGINAL beer on tap. And no, I’m not talking about Carlsberg. I’m talking about Carl’s DAD. This is some legit shit.

I won’t bore you with all the details, but basically this dude named J.C. Jacobsen opened the brewery with his “original recipe,” which is a dark lager. And it is AMAZING. Malty, dark, sweet…basically if they sold this in the US everyone would have a seriously different idea of what “European beer” is. Because it is delicious.

After our first taster, we wandered through the stables and saw some super-blonde Danish horses. 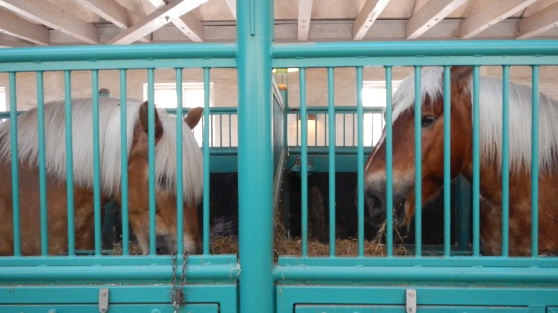 (We also saw this one horse get a huge boner, and it was really AWKWARD.)

This time, we tasted Carl’s Special, which is actually really delicious. It’s a proud man’s beer. Really I have no idea what that means. It was good. I liked it. Yum. (Also it was named after my travel buddy K(C)arl, and that’s pretty sweet.)

Then we got to wander through the Old Brewhouse, which showed how the beer was made, along with some pretty sweet photos of the beer-makers making beer back in the good old days. We also got to see some super old bottles, which awkwardly featured…well, I’m sure you can figure it out: 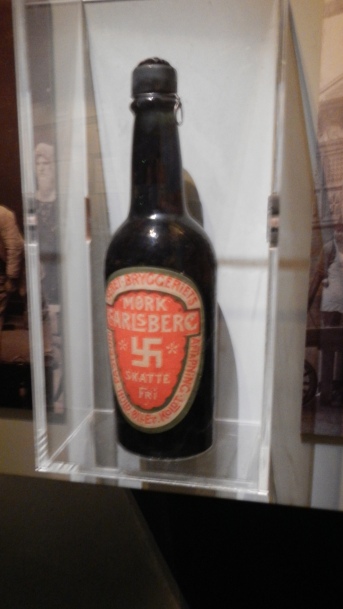 Now don’t be too alarmed, this isn’t some sort of Nazi brewery. In the 19th century, the swastika was simply a symbol that meant purity, and Carlsberg used this symbol for decades on its bottles to signify that their beer was the purest, the best, the freshest. Once Hitler reappropriated the swastika in the 1940s, however, the brewery stopped using it. Pretty cool/crazy story, eh?

Anyway, it was a fun jaunt, and we completed our tour by enjoying a pint in the Jacobsen Brewhouse and watching some of the BEST commercials I have ever seen in my life. Seriously. This is the most incredible ad campaign:

After the brewery we wandered through a lovely park and back to our hostel, where we enjoyed 1/2 price Carlsberg pints (happy hour, yay!) and played board games. (We are SO COOL.)

And then we went to dinner at maybe the best ethnic restaurant I’ve ever been to in my life. Kate’s Joint was a sort of hole-in-the-wall type spot, albeit with rather mediocre service. They had an extensive menu of North African fare, but only in limited amounts, so if you didn’t get there early half the menu was basically unavailable. But it was ok, because everything there was truly delicious. I don’t remember what Karl and I ordered, but I remembered loving it.

We were pretty pooped afterwards and so we retired to the hostel and slept soundly in anticipation of Day 2: Further Adventures in Copenhagen.

P.S. If you stick around until next time I’ll share my entire photo album with you. Yes, all of you!