About 3 weeks ago, I went to Las Vegas. Las Vegas is not my favorite place. In fact, it’s one of my least favorite places. But I had to go for work, and so it goes.

I spent the first 3 days working really long hours, so I couldn’t even bring myself to go out in the evenings. I was the loser in the group who skipped all the fun parties and went to bed early every night.

But on Sunday night, it was MY TURN. The event was over, and while I had a few responsibilities on Monday, I basically didn’t give a fuck. I was going out and I was doing it Vegas style.

(Quick preface for the next part: “we” refers to myself, two of my coworkers, and the guy running the event we were at.)

First stop was dinner. We ended up going to dinner with these two club promoters who took us to Jaleo, a fancy shmancy tapas restaurant in The Cosmopolitan hotel. I like good food, and I like tapas, so I was pretty excited. And then they brought out the sangria. And I was even more excited. (And I drank a whole lot of it.)

But the best part was the OLIVES. Once upon a time on my blog I wrote about these:

At Jaleo, I got to eat them. YES. FERRAN ADRIA OLIVES. I ATE ONE. TWO, IN FACT. They were even listed on the menu as “olives in the style of Ferran Adria.” LIFE IS MAGIC.

My night could have ended right then and there and I would have been happy. I’ve been dreaming about those olives for years. Sigh.

But my night didn’t end then and there. No. We kept going. The shenanigans must continue. We went to The Wynn. Apparently we were going clubbing.

Of course it was only 10pm, so we were far too early for clubbing. So we went to a fancy cocktail bar. I bought a round (4 drinks) and it cost me $60. I HATE LAS VEGAS.

To be fair, The Wynn is the most expensive property on the Las Vegas strip. The club promoters had arranged bottle service for us at XS Nightclub. That’s like, Vegas’s hottest club. Apparently those tables cost like $80,000 to book. EIGHTY THOUSAND DOLLARS. (Although it was Sunday night, so maybe it’s only $50,000. Who knows.)

At any rate, we went there. It looks like this: 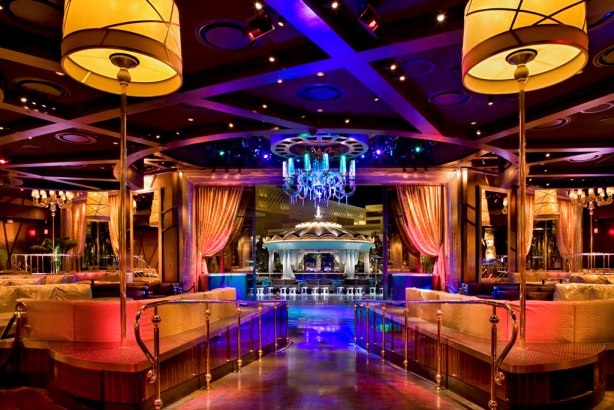 You probably think this is some kind of joke. But it’s not. I was there. I sat on those white leather banquettes. WHITE LEATHER BANQUETTES. For my whole life I thought that shit wasn’t even real.

It is real. Very real.

The funniest part of this whole thing is that it was also AWFUL. Holy shit. The minute we walked in I wanted to leave. The place was not only excessively loud, it was filled with every manner of human I hope to avoid in my life. Smarmy men with gelled hair. Girls dressed (or undressed, as it were) in the shortest dresses possible. It felt like the whole room was saying “Hey, please fuck me because I am the hottest and I have low self esteem.”

I wanted to vomit.

Unfortunately the club promoters were super excited to take us there, so we had to pretend to like it at least for a little while. We decided to forgo a bottle (“there’s no way we’re staying here long enough to finish a bottle”) but politely ordered drinks from the bra-clad waitress. (No, I don’t mean she had a bra on. I mean she had only a bra on.)

At this point the promoter-dude told me I was supposed to get up and dance on the table. I wanted to smack him. Instead of doing his bidding, I downed my drink, ordered a second, downed that one too, and stomped off in my leopard heels to the dance floor to join my coworkers.

Finally the club promoters left, and so did we. I promptly got yelled at in the Wynn lobby for not having shoes on (“FINE I’ll put my death shoes back on”–this is what I said to the bouncer outside the club…I may have been drunk). And then we went outside and I took off my shoes and wandered around barefoot for a while until my friend decided to carry me around on piggyback like the gentleman he is.

After some lollygagging about on the strip (“where are we going?” “we need road beers!” “let’s find a cab”) we finally headed back towards the Luxor//Excalibur, where we were staying.

Oh, but it’s not over yet. It was only 1:30am. It’s, like, prime Vegas time. While in the cab, my coworker Jonathan announced that, hey, it’s past midnight, so I guess it’s my birthday.

I was insanely excited about this. Like, more excited than he was. I decided we needed to order shorts. PRONTO.

So we went to the central bar in the Luxor casino and I ordered a round of Bulleit bourbon. We drank to his birthday. Then we drank more. I watched a bunch of people gamble. When I was far drunker than I should have been, I threw $20 on the table and played some blackjack. (I lost $15 and spent the rest of the night trying to lose my remaining $5 poker chip by dropping it on the floor.)

I have no idea how the night ended. I’m pretty sure I was the drunkest leopard in Vegas that night. All I know is that I woke up in all my leopard glory, face-down on a bed in our hotel room at the Excalibur. Still drunk. This was still sitting on the dresser: 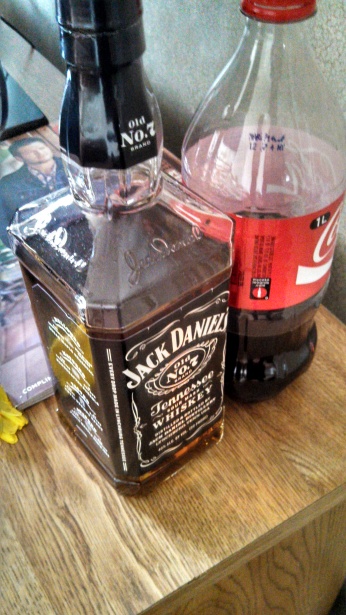 All in all, I think I did alright. I mean, I definitely did Vegas. Still not sure I ever want to go back, but if I do, I will make sure to go big again. Because hell, what happens in Vegas probably won’t happen anywhere else. At least not in the same ridiculous way.