Ah, day drinking. It really is one of the greatest pastimes on earth.

Yesterday I went on a biking and beer-drinking adventure with my friend Chris. Because what’s more fun than riding your bike around Seattle and drinking beer at craft breweries on the weekend?

Things started poorly when I decided to take us to a brewery that doesn’t exist. #winning

Somehow, Chris decided I was still trustworthy enough to follow me a second time, and we actually began our drinking adventure at Peddler Brewing Co. This turned out to be a stellar choice for our first stop. At 1:30pm, the place was not particularly full yet, so we sat at the bar and shot the shit with the bartenders, both of whom were awesome Midwestern transplants who enjoyed making fun of each other and talking to us instead of serving the other customers. They seemed to think we were pretty cool, because we ended up with a free beer as well! 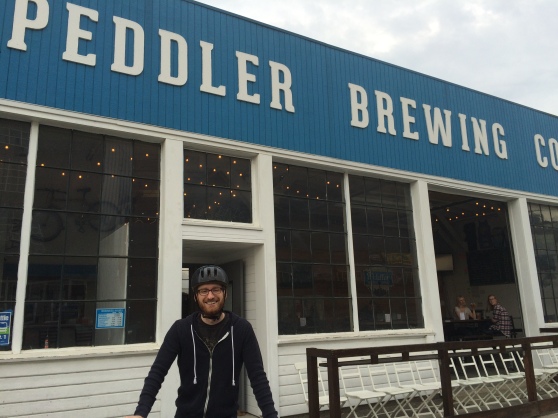 We tried the two IPAs they had on draft: I had the On Your Left IPA, and Chris had the Tropic Thunder IPA. Both were delicious, but mine was better. Christina 1, Chris 0. Haha!

(This wasn’t actually a competition. But now I’m excited about making this a competition after the fact. Pretty sure I’m going to lose though.)

The adventure could very well have ended there, because despite the fact that I told myself I would photo-document the entire afternoon, this is the only photo I took. So I think I lose a point for that. Back to 0-0. Sigh.

Somehow, though, the adventure continued. For some unknown reason, Chris allowed me to lead the charge again to our next stop: Lucky Envelope Brewing. This brewery has only been open since May, so neither of us had been there before. Hurrah, new things!

(I stole this photo from the internet!)

This time we were lame and both ordered the Fresh Hop Citra Pale Ale, because ’tis the season and soon the fresh hops will be gone. It was good, but not amazing. We both get a half point for effort. Or something.

Next stop was Reuben’s Brews, which is hands down one of my favorite breweries in Seattle. They have a new-ish taproom that is pretty sweet, and we were joined by Laura and Juanse, who are super cool people who ride bikes a lot and are basically just the most fun to hang out with. We also needed food, and there is always a food truck at Reuben’s, hence the decision to go there. Saturday’s food truck was called Napkin Friends, and it was insane.

Ok, so I know this post is supposed to be about beer. But can I just talk about this food truck for a minute? HOLY YUM. I am actually having trouble writing about it right now because I’m beginning to drool all over my keyboard just thinking about this sandwich. (Ok, I know, that’s kind of gross. But if you’ve ever read my blog you’ll know that I often discuss my overt drooling habits when talking about delicious things. So you might as well get used to it. Or don’t, what do I care?) 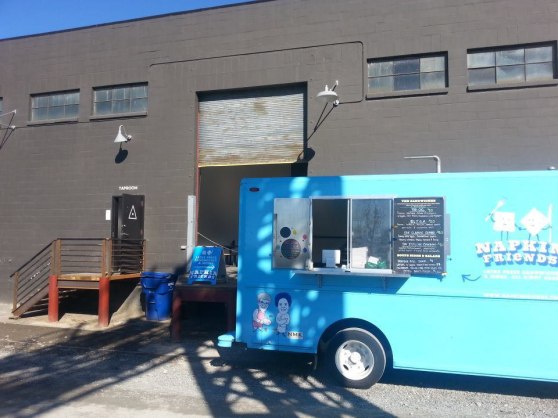 For those of you who didn’t click on that link and are still reading this, here’s the deal: this sandwich doesn’t have any bread. Sounds crazy, right? But no, because it’s AMAZING. Instead of bread, there are latkes. Yes. Potato pancakes. Delicious potato goodness. Two of them, hugging the contents of the sandwich with such care and joy that your taste buds legitimately can’t contain themselves anymore, and once you bite into the sandwich you’re transported to a world where bread no longer matters, because fuck normal sandwiches, THIS IS LITERALLY MAGICAL.

[Sorry. I need a moment to breathe. And by that, I mean WINE BREAK. You know, to calm my nerves.]

Ok. ANYWAY. Back to business. And by business, I mean beer!

Reuben’s Brews is a wonderful spot, and they have a lot of beer. It’s pretty impressive. We’re now at a point in the afternoon where I started losing track of shit, so I don’t entirely remember what we were all drinking. I know I had an Imperial Pumpkin Ale of some sort. I think Laura and Chris both had a Dark Lager. I don’t remember what Juanse ordered, because by then I was a) slightly drunk and b) absorbed in the really intense social/political/real-life-shit conversation we were having. Which, of course, I have little memory of now. Woohoo!

Oh, and as for points, I get points for drinking the strongest beer at the table. So Christina 1.5, Chris 0.5. YES!

So things get a bit shitty here because it started to rain. So, summoning my tipsy authority, I convinced Chris to go back to Peddler for another beer instead of riding all the way home in the rain. He was clearly not entirely on board with the idea, but ultimately he admitted (after the fact) that it was a GREAT IDEA and I am a genius. (He didn’t say that. He did say it was a good idea though. But only afterwards.)

The return to Peddler is mostly a blur. We sat there for a while, but the place was filled with Ohio State fans and I didn’t really understand what was happening. I also took far too long to drink my beer. So I lose a half point.

At this point it was definitely time to go home. Both of us had uphill rides ahead of us. But seeing as Chris had to go at least 2 miles farther than I did, he gets an extra point. Christina 2, Chris 3.5.

Wait, no. That can’t be right. I went out day-drinking for 5 hours and rode my bike and was super cool and CLEARLY this means I am a winner. Yes. (Chris might be more of a winner, but he’s not here to defend himself so HA!)

And so, dear friends, the moral of the story is that I drank a lot, I biked a lot, and I won. Because that’s just a fact.

[Next time, on Christina’s Adventures in Drinking: That time I was forced to drink fruit beer in London.]