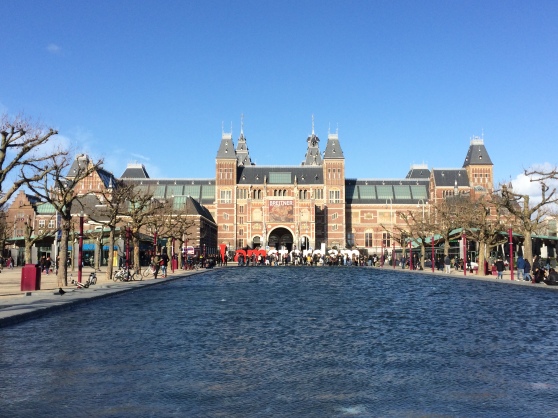 Well, it’s been 2 months since I last wrote. I had this whole plan to write about ALL THE THINGS I’ve been doing, and to move into my own place, and to start blogging more regularly, and to bake bread, and everything else.

But then life struck, again. As I predicted in my last post, there were more bumps in the road. Many, many more. Like, a whole shitload of obstacles. I mean, c’mon people. This is getting ridiculous.

I don’t want to bore you with all the details, but let’s just boil it down quickly: I had issues with my residency permit (came through at the last minute, and I only got my social security number thanks to the good graces of my friend Bram). Then had an apartment disaster (landlord pulled the plug 2 days AFTER I was supposed to move in). I was again saved by Bram. (Bram: You are the fucking man.) AND, I still technically have not received a paycheck. (Don’t worry, I will get paid for every single day I’ve worked. But it’s been an epic saga to sort that out. Dutch banks & foreign companies do not mix well.)

And so, 3 months after my arrival in Amsterdam, I was still without my own apartment, still without a paycheck, and still wondering why on earth everything bad seems to happen to ME.

I realize that sounds a bit melodramatic. But in Bram’s words: “Karma has to eventually go the other way, right?” Because seriously, it’s been ridiculous. Nothing has gone smoothly. This whole move has been a massive shitshow.

And yet, here I am. Powering through. Several years ago, this type of situation would have utterly broken me. I would have become depressed, negative, and convinced myself that nothing will ever be good ever again. Hell, I might have given up entirely. Because Amsterdam does seem to be telling me that I should turn around and go back to where I came from. But I refuse. Because I fucking belong here, I just know it.

There is a group of people here in Amsterdam, and I love them. I call them my Friends. They are cool people. They seem genuinely excited to see me when we we hang out. They are happy that I live here now. Many of them have told me exactly that. And that means a ton, and I can’t just leave now. Because I have friends, and I love these friends. I want to see these friendships grow.

I also just went to Spain for a weekend for a frisbee tournament. At the tournament, people would ask when I was going home. I would say “Tuesday. I’m flying home on Tuesday.” Home. Amsterdam. They are the same now. The flight from Barcelona to Amsterdam felt so natural. It was perfect.

And last weekend, I finally moved into my new apartment. I have my own bedroom, and I have a lovely roommate. This week, I’m going to finish unpacking and hang my art on the walls. And it will be real. For the first time since December, I am going to have MY own bedroom, with MY own things in it. Fucking finally.

So no, it hasn’t been easy. It’s been a fight. But I am fighting hard. Because Amsterdam is my home now, damnit.  You can’t get rid of me that easily.